Hard-core golf fans know that two Richard Johnsons play professionally. Richard S. Johnson, a 5-foot-7, 145-pound Swede, was the dominant RJ to start 2007, entering his fifth consecutive year as a PGA Tour member. Though he surely could beat up his namesake, the 6-foot-4, 220-pound Richard Johnson of Wales was the “other” RJ, a Nationwide Tour field-filler.

What a difference a year – and a swing coach — can make. The Welsh Richard Johnson of 2007 bore no more resemblance to the ’06 model than he does to his Swedish homonym. After starting work with longtime Hank Haney disciple Mark Moore, 36, last December, Johnson, 35, charged to the Nationwide money title and an ’08 PGA Tour card with two victories in his final four events, including the Nationwide Tour Championship. In doing so, he soared 209 spots in the Golfweek/Sagarin Performance Index and earned a spot in the 2008 Players Championship. (Richard S. Johnson fell to 165th on the PGA Tour money list, forcing a trip to Q-School.) Johnson’s year-over-year improvement is staggering. In 2006, he ranked in the Nationwide’s top 30 in only one of 27 categories: par-3 birdie percentage. In 2007, he was top 10 in 15 categories, including No. 3 in all-around. He also went from 295 to 118 in OWGR. (Note to would-be nitpickers: He also climbed 10 spots in par-3 birdie percentage.)

“I played the 2006 Q-School Stage 2 in Europe, and the final straw was when I had an 8-iron in a 20 mph downwind, so I’m basically chipping it, and the ball landed 3 feet from the hole and spun back off the green,” Johnson said. “I thought, ‘This is ridiculous – I’ve got to fix this.’ Two weeks later, I shut it down and started working with Mark.”

Why Moore?
“I called for a lesson with Hank Haney – I like what he did with Tiger – but I guess he doesn’t give lessons anymore,” says the likably droll Johnson. “A Tour rules official told me to call Mark. We chatted about what I wanted to do, and he had some similar ideas. Plus, I figured he’s charging $250 an hour for some reason – he must be pretty good!”

The feeling is mutual.
“Richard is a super-humble guy with a great attitude,” Moore said. “He learned he has an extra gear that he didn’t know about. We’re unleashing and harnessing his power at the same time. He’s just starting to glimpse how good he can be.”

Johnson and Moore decided in their first meeting to change Johnson’s shot shape to a draw. For Johnson, the choice was partly for novelty’s sake. “It was a lot of new movements, which was interesting in and of itself, to give me something new to do all that winter instead of sitting around,” he says. “It seemed kind of fun.”

Moore’s approach was more analytical. “If a swing is like a watch, with different gears, you need to ask which ones are out of whack and what’s the order they need to be repaired in,” he says. “Richard’s shoulders were open at address and the club still went inside. If I closed his shoulders, it would go even more inside. He didn’t need to worry about his shoulders being open – or about the fact that his head was in front of the ball, which we may get to down the road.

“I told Richard, ‘If I can get the club to go more up, I have a reason for you to rotate it to a more laid-off position.’ My goal was to get his right elbow to work underneath, so that the forearms worked clockwise (on the backswing). He was taking it inside and turning his forearms counterclockwise. That was the biggest change. If I’m going to rotate the clubface through impact, I really want the face open (at the top of the swing).”

Compare Richard’s Tour Stats before and after working with Mark

The diagnosis
“My swing was an outside, loop it inside, cup it at the top, come over the top, reverse myself and slap at impact to hit,” says Johnson of his move circa late 2006. “My ball flew like it looked OK, but it didn’t go anywhere. My initial ball speed was 180 mph, and my ball wasn’t going farther than guys with a ball speed of 160 mph. I wasn’t efficient enough.” 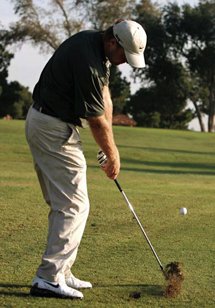 Recalls Moore of their initial range session: “His ball is starting off left, high-rising, and fading to the right. He told me that he was afraid of a hook. I asked him when the last time was he hooked a ball, and he couldn’t even remember. I said, ‘You pull it left, so I can understand why you wouldn’t want to hit a hook, but I don’t see anything in your swing that’s characteristic of a hook.’

“His tendency was to take the club inside. He’s not very flexible, so his right arm got way behind him, and the club would get steep and upright, and go across the line. His first move down was to turn his shoulders hard, and then he would fall back to keep from pulling it left. He’d reverse-pivot and hold on while hitting through. He was getting a lot of spin because he was steep, with the face open.

Go-to chip shot
Americans tend to regard European players as inherently more imaginative around the greens. Johnson isn’t such a player.

“I tend to keep the short game very simple – I pretty much use one shot around the green, with a 60-degree wedge,” Johnson says. “We play out of 4- or 5-inch rough, so there aren’t many options except the sort of that’s my go-to shot. But, in general, I’m not a bump-and-run guy.”

“Richard loves to pull out that 60-degree wedge, probably 80 percent of the time,” says Moore, who caddied for Johnson three times this year to get a better feel for his tournament game. “You could question his shot selection sometimes, but he’s confident and consistent with it.”

Turning 5s into 4s
“One of the first things I asked Richard about was how he played the par 5s,” Moore recalls. “The thing is, he approached the par 5s like they were all easy par 5s – he had zero mental ability about grading his shots: red light, yellow light, green light. I was once the same way, just shooting for the bull’s-eye. (But) that’s like a slot machine.

“He told me he’d play a hard par 4 safer, even if it were the same shot. I told him, ‘Par is irrelevant.’ Each reachable par 5 needed to be treated as a hard par 4. The fat side of the green is going to leave you a 40-foot putt and a 2-foot tap-in, where if you miss the green in the rough, you might have 8 feet left. The guy with the 2-footers will beat your brains in day-in and day-out.”

Bunker timing
“My opinion about bunker play is that it’s all technique,” says Johnson, who ranked fourth in sand-save percentage (59.8 percent). “Some of my old coaches, older guys, gave me some good advice on it.

“Bill Ferguson, who used to coach Colin Montgomerie and Ian Woosnam, was big on swinging as you normally would – don’t take the club up, don’t chop across at it to put spin on the ball, just swing normally around your body. And then I had a great old pro down in Augusta, Ga., (Johnson played college golf at Augusta State) named Fred Price, who always said that there’s a different timing to a bunker shot, that you need to always keep your head down until you completely finished the swing. I’ve always found staying with it longer than with a normal shot to be very useful. It keeps everything where it needs to be.” 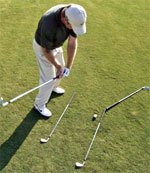 OK, now what?
Once Moore had moved Johnson through the desired backswing, the player had a question: Now what? “He said he didn’t know how to hit the ball from there,” Moore remembers. “I explained to him that his arms needed to lower without his shoulders turning, and that was tough for him. So I got in there and moved him around, and told him that he’s got to bring the club down without moving his shoulders, that the only thing he could do was lower his arms and twist them back (to the ball). He was so fast turning his shoulders before that he never swung his arms; it’s much more of an arm swing now.”

Moore also placed a club on the ground past impact pointing 30 degrees right of the target, asking the player to start each shot along this line. Johnson still employs the drill during practice sessions to ingrain this mental image. During competitive rounds, Johnson’s pre-shot routine includes a practice swing that exaggerates the dropping arms move.

“A person’s feel and his real aren’t necessarily the same,” Moore says, adding that Johnson rarely, if ever, overdoes the move during his actual swing.

These changes – embedded through Moore physically positioning Johnson as needed and the player’s long winter hours of mirror work (neither man has much use for practice drills) – began the road to a shallower impact and a square (and closing) clubface. The high pull-cut is now a tight, penetrating draw with vastly reduced spin rate: Johnson’s driver launch, which once measured close to 4,000 revolutions per minute, now generally clocks in at about 2,400 rpm.

“Really, I still don’t entirely have it – it’s very much a work in progress,” Johnson says. “But I’m longer than just about everybody now, and it’s an easy long. It’s not like I’m pounding it. I feel like I must be doing something right. And visually my swing looks off-the-charts better than it did, a different planet.”